Gormanston Castle is located at Balbriggan, County Meath in the Republic of Ireland. The history of the Viscounts Gormanston in that country (family name Preston) goes as far back as far as the 11th century.

There have been seventeen successive Viscounts in the family with the living incumbent being the Hon. Jenico Nicholas Dudley Preston (b. 1939), who now resides with his family in London.

The castle was acquired by the Franciscan Order in 1947 and a college attached to the old building was constructed in 1957.

A curious tale about the Gormanston family is that when a Viscount is on his deathbed the foxes come to gather at the castle from all over the countryside out of respect to him. This phenomena occurred on the deaths of the 12th and 14th Viscounts.

Credit for the following extract goes to Medieval-Castle.com:

Preston family records going back to the 17th century record that in 1860 when the 12th Viscount was dying, foxes were seen around the house for several days especially sitting beneath the Viscount’s bedroom window from where they barked and howled all night.

After the Viscount’s death, the foxes were still in evidence in front of the house and they only returned to their natural habitat after the funeral.

What is strange is that the foxes were said to have walked through the poultry without touching them and they were never attacked by dogs as if they were somehow not of this world!

The foxes strange behaviour is said to have begun during the 17th century when the then Viscount Gormanston had saved the life of a vixen and her young during a fox hunt.  The first appearance of the foxes had been when that particular Viscount was on his deathbed.

2 thoughts on “Gormanston Castle: A Tale of Foxes and ancient Viscounts” 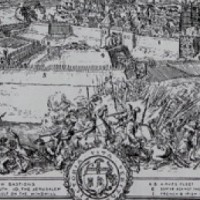